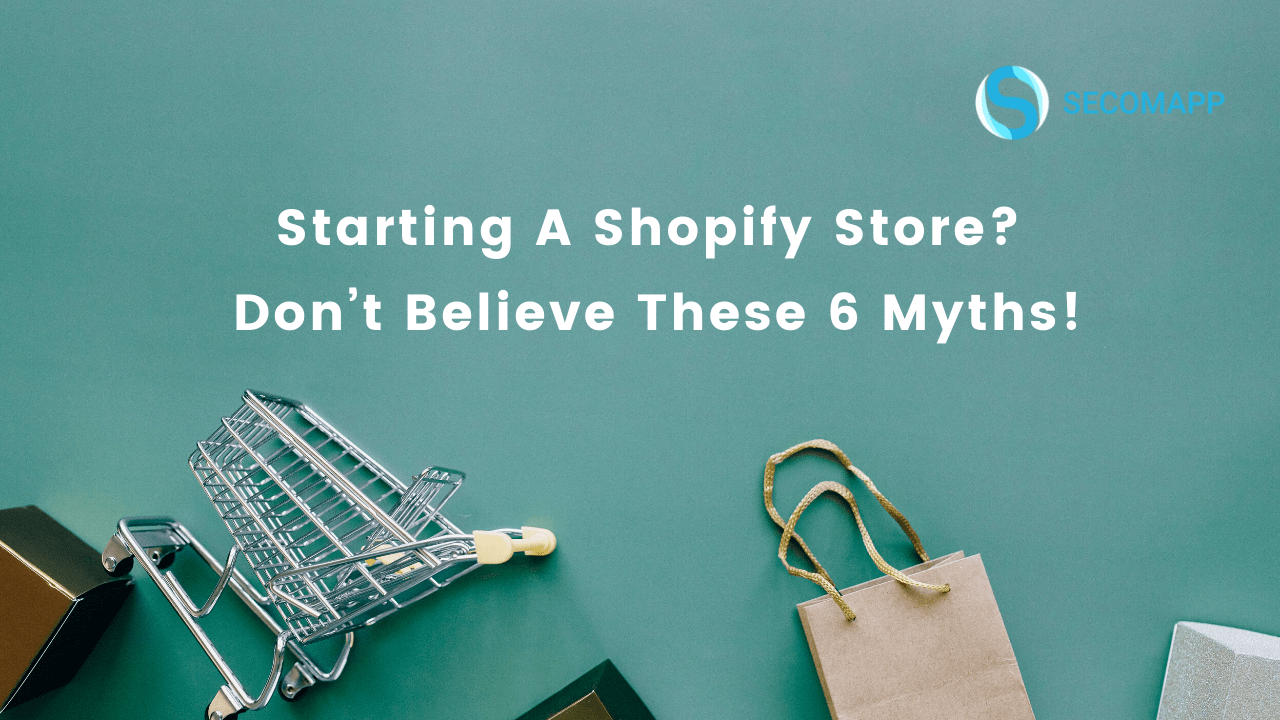 If you’re a startup, entrepreneur, or another form of business, you may have heard about Shopify. Among other eCommerce platforms, for some reason, people and businesses are flocking to Shopify to buy and sell online.

Though, despite its recent successes over the years, some people and businesses might still be skeptical about using Shopify. Is it as dependable as people make it out to be? Does the platform come with hidden flaws? Why should people care?

These questions and more are reasonable. However, these questions may come from listening to the endless list of myths concerning Shopify. Perhaps this is why people are holding back from trusting Shopify as a reliable eCommerce platform? Maybe so.

The good news is, you don’t have to believe in many of the myths about Shopify. In fact, many of these myths are just plain false!

In this article, we’ll talk about these myths about Shopify. Today’s discussion will go as follows:

So, if you’re ready to learn the truth about Shopify, and to demystify and debunk the myths surrounding this eCommerce platform, then let’s dive in!

“With digitalization, nowadays, people are doing more and more things online,” says Blanca Wilson, a marketer at 1 Day 2 write and Write my X. “The digital era has already paved the way for more online stores – retail, food, consumer goods, etc. Essentially, if they wanted, people can sit at home and shop for something with a few taps on their phones, rather than go out to a brick-and-mortar store to buy things. Whether they use a mobile phone, a desktop computer, a laptop, or some other mobile device, they can shop from the comfort of their own homes.”

With that said, there has been a rise in eCommerce sites in the most recent years. According to WPForms, there are between an estimated 12 million and 24 million eCommerce sites to date worldwide – and that’s in 2021 alone!

“Since many people are online more, it justifies the rise in eCommerce sites,” adds Wilson. “With eCommerce, people can buy and sell things at their leisure.”

Therefore, Shopify is considered one of the most popular eCommerce platforms on the market. With 1.7 million merchants and 1.59 million live websites using Shopify, it’s no wonder the platform has risen in both popularity and usage.

Shopify is one of the most popular and most favored eCommerce platforms for many reasons. The platform has easy-to-use features that any website or business can implement at its disposal. The platform is offered at different plans, thus diversifying the eCommerce landscape. And, the platform offers marketing tips and other resources that help businesses thrive online.

With so much promise and profits to be made, why wouldn’t people and businesses choose Shopify?

Well, if you believe the 6 myths that we’re about to show you and debunk, then you might be doubting yourself about Shopify’s benefits and opportunities. But don’t worry! We’re here to do some debunking!

With that in mind, we’ll now expose 6 of the most common myths that too often drive people away from using Shopify. Let’s now get into the debunking!

Myth 1: Shopify Is Not Viable, Because It’s Hard To Set Up.

First and foremost, Shopify isn’t as “difficult” as one might think. In fact, the platform is simple to use, once you get started.

While this fact is obviously true – that all businesses are hard to build from the ground up, with Shopify, there’s no hard coding to do or elaborate software to download. While your eCommerce store won’t be popular overnight because of Shopify, the platform can still lead you in the right direction and growth. However, it still takes you – the business owner or entrepreneur – to put in the effort to make your website or business thrive on the platform.

Plus, Shopify gives you various tools on the spot. In other words, the platform doesn’t care if you’re a tech wiz or a coding god – or if you’re a basic computer user. Shopify is there to help you through the process of setting up your eCommerce store.

While security has been a looming issue over the years, especially with eCommerce sites, that doesn’t mean that having a Shopify is a lost cause. If some believe that Shopify isn’t safe, then why are millions of sites and shops popping up on the platform?

In reality, Shopify is built to be a secure eCommerce platform, so that both buyers and sellers are safe from malicious attacks. The platform also comes with plugins and other features to make your experience safer online. In hindsight, Shopify is safer than one might think!

The truth is, Shopify has many options for you to choose from and utilize. In fact, here is a list of options that you might be interested in when using Shopify:

Now, these features are only the tip of the iceberg. There is still much to be seen and to be used on Shopify! You’ll be surprised to see how many things you can do to build your online presence. They’re worth checking out!

Myth 4: Shopify Is NOT SEO-Friendly.

You may have already heard about search engine optimization (SEO). Even if you’re not familiar with SEO, that might have already discouraged you from trying Shopify. But fear not! SEO is your friend here, and Shopify totally gets it!

SEO is what drives consumer traffic online, and that’s where Shopify thrives! Since many eCommerce platforms don’t offer ways to gain good SEO for your business, Shopify offers SEO plugins, which help you along your way to a good online traffic flow.

When it comes to SEO, Shopify offers the following:

Still don’t know how to do SEO? No problem!

Shopify, as mentioned before, has tips and resources that you can refer to whenever you’d like. Or, if you’d like to have a second opinion on how to do SEO right, then feel free to hire a professional SEO agency to handle it for you.

“The truth is, Shopify cost isn’t high for anyone curious about investing in it.” says Thomas Grey, a business writer at Brit Student and Next Coursework. “The eCommerce platform has payment plans for you to choose from, including the Lite Plan, where you can start a free 14-day trial, and then continue using the platform for as low as $9 a month. While you might not get access to every single feature on Shopify with the Lite Plan, you’ll still get features that you can start and grow from. In fact, this plan is ideal for smaller businesses and startups. In hindsight, you’ll be getting the best deal if you’re just starting as a business.”

Myth 6: Shopify Is A Hotbed For Competition

Finally, you wouldn’t want to fall for THIS myth!

Yes, competition can be fierce when it comes to eCommerce. However, with so many websites and businesses showing up on Shopify, as well as the need for more businesses to utilize the platform, competition is a good thing! Plus, as a business or an entrepreneur, you’ll come across competition all the time – that’s a huge part of the game!

On Shopify, you’ll be up against other websites and businesses; and that’s totally okay! Who knows? You might learn from other businesses on the platform how you can improve your own eCommerce shop! Inspiration is everywhere, and the sky is the limit!

Just keep in mind: You’ll need to consider how you operate your eCommerce shop in the following areas:

Just remember to plan accordingly, and make sure that you stay ahead of your competition.

As you can see, Shopify has a lot to offer to online businesses and entrepreneurs. So, why not take advantage of its many offerings?

As we have shown you throughout this article, there are many misconceptions and misunderstandings about Shopify. Luckily, we were able to debunk many of the most common myths about the eCommerce platform!

Just to recap, here was what we’ve learned from debunking 6 myths about Shopify:

So, there you have it!

Now that you know the truth about these myths, you can now enjoy Shopify for your eCommerce marketing needs, and turn your business into an online hotspot for consumers! Leave your fears behind, as you experiment and grow with Shopify. While things may not be easy at first, perseverance will eventually make things easier for you and your brand.

Michael Dehoyos is a writer and editor at Dissertation writing service and Research paper writing service. He is also a contributing writer for Origin Writings. As a marketer, he helps companies improve their marketing strategies and concepts. As a content writer, he writes articles about eCommerce, business marketing, and coding.